Tell me about rhinos what can i do?Home

The word rhinoceros comes from the Greek rhinokerōs meaning ‘nose-horned’, from rhis, which means ‘nose’, and keras , which means ‘horn’.

Rhinos are large mammals and are herbivores, so eat a diet of plants.

Rhinos have poor eyesight, but very good hearing and a good sense of smell. They tend to charge if they think something may be a threat, as they can’t see well enough to know what is approaching.

They use their horns to protect themselves from predators, as well as for displays of dominance when they meet other rhinos. The horns continue to grow throughout a rhino’s lifetime, so will grow back if some breaks off. All rhinos have 3 toes on each foot and a toenail on each toe.

Rhinos mark the edges of the area where they live, known as their territory, by spraying urine and also with dung piles (known as middens), and the dominant male will scatter the dung by kicking it. (Dominant means that he is the strongest, so is in charge).

Rhinos love to wallow or roll in the mud. Wallowing keeps them cool, coats their skin with mud, which acts as a sunscreen and also gets rid of parasites like ticks.

There are 5 species of rhino in the world.

Predators such as big cats are not a threat to adult rhinos, but they are to young ones. The biggest threat to rhinos is humans!

Rhinos are often killed by poachers for their horns, which are sold to be used as trinkets or for medicine in Asia, where they believe the horn has a medicinal benefit. In fact, rhino horn is made up up of the same substance as your hair and nails, called Keratin, and has no healing powers whatsoever.

Rhino horns are also used in some parts of the world to show the wealth or importance of the owner, and this uses the whole horn, not just shavings, so is leading to even more rhinos being killed. They don’t have teeth at the front of their mouths, so use their lips to pluck leaves or grasses. They only have hair on their ears, the tip of their tails, and eyelashes.

White rhinos are the larger of the two African species of rhino and the second largest land mammal next to the elephant.

They are grazers, feeding on grass and have a broad square lip, which they use to pluck the grass they eat.

There are two subspecies:

There are now only 2 female northern white rhinos left on the planet, living at Ol Pejeta Conservancy in Kenya.

White rhinos have 2 horns, the front horn is the bigger of the two.

Female white rhinos (cows) are usually found in pairs of mother and calf, but they may live in small groups with other females and calves. A white rhino cow will have her first baby when she is around 6 or 7 years old and her pregnancy last for about 16 months. The calf stays with its mother until it is about 3 years old or when the mother has another calf.

The adult male rhinos (known as bulls) usually live alone, (that is known as solitary) but there may be other bulls living close by, which are known as satellite bulls. The main or dominant bull will tolerate the others, as long as they don’t challenge him, but he will see off any unknown bulls that come onto his territory.

White rhinos live on grassland, but like areas of bush cover for shade. They also need a waterhole for drinking, as well as wallowing in mud.

White rhinos can run surprisingly fast, up to 40 km/h. 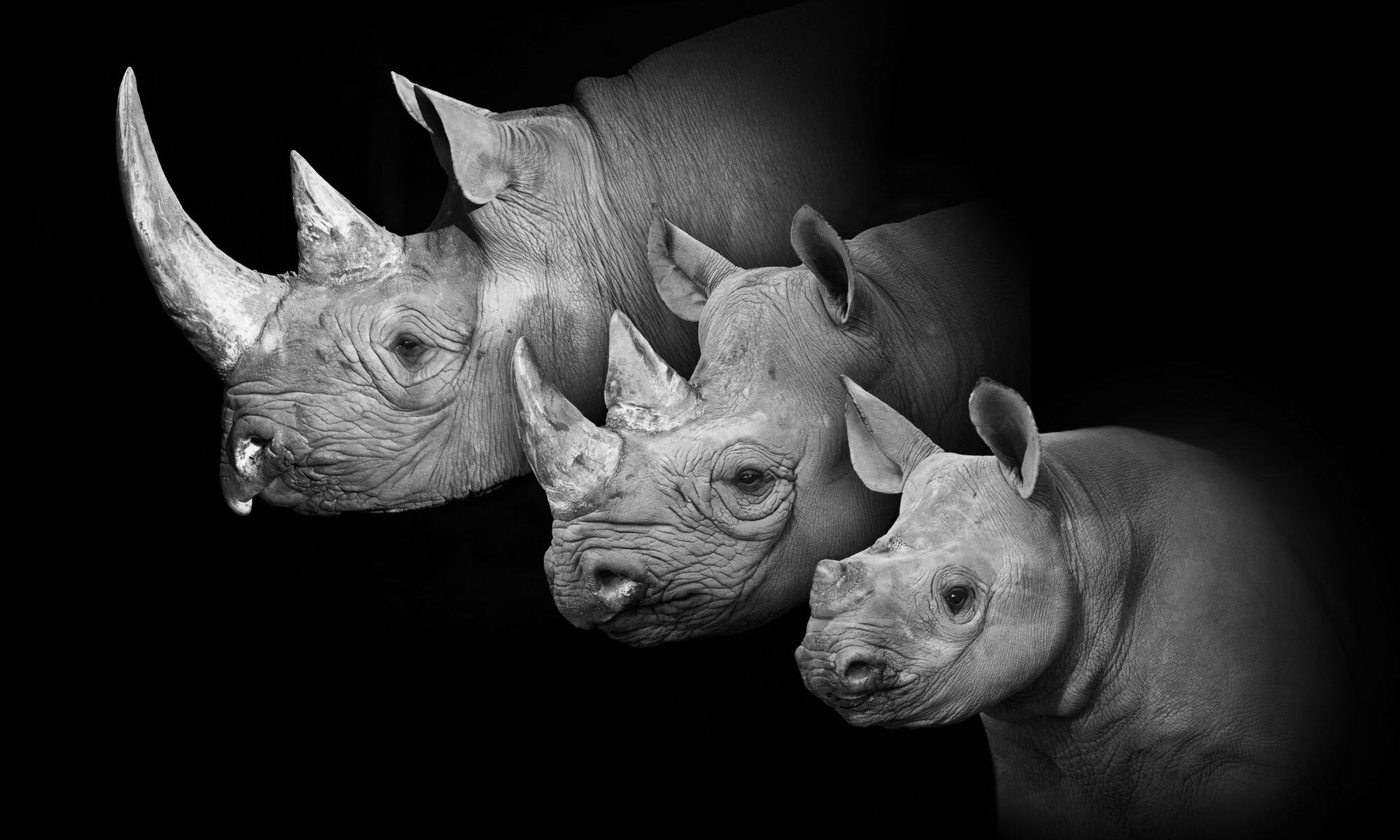 There are four or possibly five subspecies:

The black rhino is the smaller of the two African species and like the white rhino it has 2 horns. The main difference is the shape of the lip, as the black rhino has a hooked lip, which it uses to grasp small branches and pluck leaves to eat. They are browsers and eat trees, bushes and shrubs. Black rhinos are most active at night and like to sleep in a cool spot or wallow during the day.

Adult male black rhinos are usually solitary and will fight other bulls over their territory.

The females have their first calf at about 7 years old, but it can be as young as 5 years old, or sometimes even more than 10 years old and a black rhino will have a calf roughly every two or three years. The calf will live with its mother until it is old enough to look after itself ( that is usually between the age of 2 and 4 years for females, but can be up to 6 or 7 years for males). The mother will usually reject an older calf when she has a new calf, but may allow her other calves to return to her once the youngest one is between 3 and 8 months. Older, rejected calves usually attempt to join another female or occasionally a young male who will tolerate their presence, as they feel safer with another rhino nearby.

Related rhinos have long-term bonds, just like human families, and will often spend short periods of time with each even after they have left their mother.

There are three type of Asian rhinos, Indian, Javan and Sumatran. Asian rhinos have an even more armoured look than African rhinos due to folds in their skin. All the Asian rhino species have long dagger shaped lower front teeth that are very sharp and useful for protection and cutting branches. Asian rhinos love water and can even swim!

The Indian rhino is the second largest rhino species.

It is a brownish-grey and hairless, with thick folds, which look like armour plating. As the name suggests, greater one-horned rhinos have just one horn. They are grazers, preferring grass, but will eat leaves, branches and shrubs.

They are very good swimmers and can dive and feed under water, and like to live alongside bodies of water.

They are usually solitary (so they live alone), except for mothers with calves, although they do meet at wallows or in areas where there is a lot of food available. 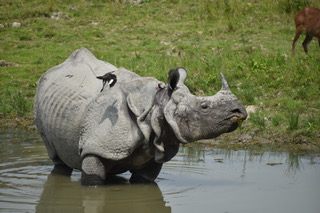 Javan or lesser one horned rhinos

Scientific name: Rhinoceros sondaicus; from the Greek “rhino”, meaning “nose” and “ceros” meaning “horn”. Sondaicus derives from “Sunda,” the name for the western part of Java, but the word is also used to indicate the main chain of Indonesian islands, the “Sunda islands”

Javan rhinos are very rare, and not much is known about their behavior.

There are estimated to be only 74 left in the world, all in the Ujung Kulon National Park in Java.

Javan rhinos have one horn and grey or grey-brown skin, it looks almost black when it is wet, with pink colouring in the folds. It has skin folds like the other Asian rhinos, but the neck folds aren’t as big, but they do continue over the back of the neck, forming a “saddle” on the neck/shoulder area. The skin is covered with a mosaic pattern, giving them a scale-like appearance.

The Javan rhino is smaller and lighter than the Indian rhinoceros and similar in size to the black rhino. 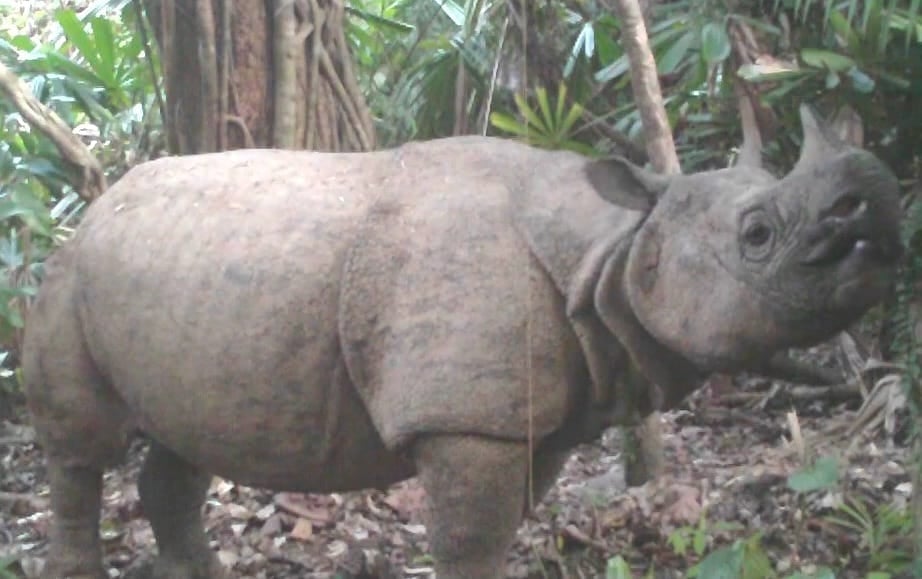 Javan rhinos are browsers and have a long pointed upper lip similar in appearance to the African black rhino, the Greater one-horned and Sumatran rhinos and they eat over 300 plant species. It is a browser and a grazer, but eats mostly leaves, young shoots and twigs.

Javan rhinos are usually solitary, except for females with small calves.

Not a lot is known about Javan rhinos, because they are not seen very often, but it is believed that a female will be pregnant for between 16 and 19 months

Javan rhinos are estimated to live an average of 30-45 years in the wild.

Sumatran rhinos have two horns. The front horn is long, smooth and thin and the rear horn is much smaller, sometimes no more than a little bump. They are the smallest and hairiest of the rhino species. The numbers are not known for sure, but there are believed to be no more than 80 left in the world.

Their skin is reddish-brown and covered with short bristly hair, which can grow to look like fur, especially in captivity where they aren’t running through dense bush, which can keep the hair short. The hair is longer on their ears and tuft of their tail.

Sumatran rhinos live in dense tropical forests and are browsers, feeding on fruit, leaves, twigs, and bark. Sumatran rhinos are usually solitary, except for females with small calves. The female Sumatran rhino will have her first baby at about 6 or 7 years old and she is pregnant for 15 or 16 months. She will have a calf roughly every 4 or 5 years,

Sumatran rhinos are estimated to live an average of 30-45 years in the wild.

You can find more information about rhinos in the resources section of the website. Tell me about rhinos